Lick Lick the Stress Away with the Lick Lick Pad

Ever wonder why your pet covers you in kisses? In addition to being an adorable (and sometimes sloppy) sign of affection, studies have found the licking motion actually releases calming endorphins in your pet’s brain! If you pay close attention, you’ll see your pup uses their tongue for more than kisses, drinking, and “cleaning” up that bit of food you accidentally dropped on the floor—it’s also a method of relieving stress.

With summer finally here, you might find your pet’s tongue is making an appearance more often, and that’s partly because warm weather also brings loud noises. Thunderstorms and fireworks are a big concern for many Pet Parents, and statistically, the 4th of July has the highest number of lost pets. There’s also the matter of more frequent baths—after all, storms don’t just bring noise, they also bring mud! That’s why the Lick Lick Pad is a must-have for any Pet Parent. 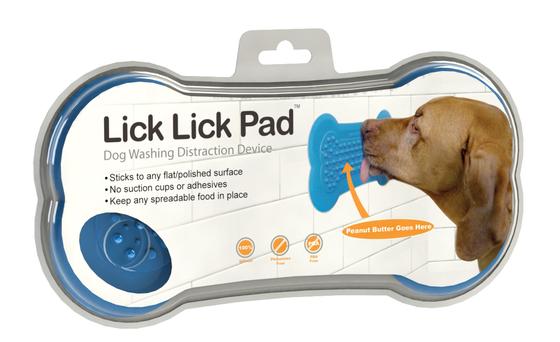 Similar to the LickiMat, the Lick Lick Pad is a distraction tool that easily adapts to all sorts of stressors. The game-changing feature is the sticky back. Press it onto any smooth or polished surface and it’ll stay perfectly in place, which is extra useful during bath time and nail trims. Just stick it on your tub’s wall, cover it in their favorite spreadable treat, and watch as your pooch ignores the suds to get to the snack! The grooved surface gives food lots of nooks and crannies to hide in, and most dogs won’t stop licking until they’ve gotten every last bit, meaning plenty of time for those natural endorphins to be released.

Worried about sticky residue on your polished surfaces? Don’t be! The Lick Lick Pad easily peels off without a trace, so the only cleaning you’ll have to do is a quick wash in the sink so it’s squeaky clean for next time.

If you want to amp up the calming factor, incorporate a bit of CBD or calming supplements into their spreadable snack. These natural oils are most effective when absorbed by the tongue, plus, you get to avoid the hassle of dogs who get a bit squirmy when it comes to droppers.

Chill out this summer by stocking up on these and many other anti-anxiety tools in-store, over the phone, or online at twobostons.com!